Halloween 2009 my daughter was 16 months and her playgroup was having a Halloween party so I decided instead of going for a store bought costume I would make one for her.  I asked my husband for a suggestion and he came up with flying monkey from wizard of OZ.   A little after making the suggestion he told me he was joking but by that point I already had an idea and a plan and made my way to my local fabric shop and got what I needed.  She won first prize for the costume which was great was totally blown away, and spent the following few weeks having mum’s come up to me and ask where I got bought it from.

And next up is my variation of the costume 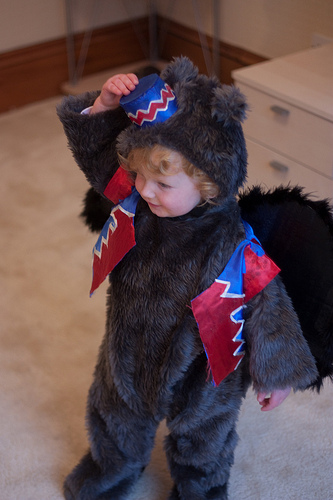 OK so my flying monkey is not all that scary but I’m still pretty happy with how it came out.

How I made it

At the time I made most of the costume I was a bit under the weather with the flu and was unable to borrow my mum’s sewing machine as mine was broken so all the work was done by hand but if I had to do it again I would certainly use a sewing machine as my fingers have never been the same again after all the pin pricks!

Firstly I started with the hat. 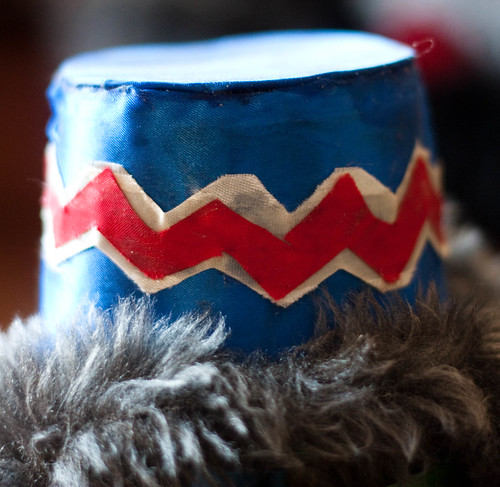 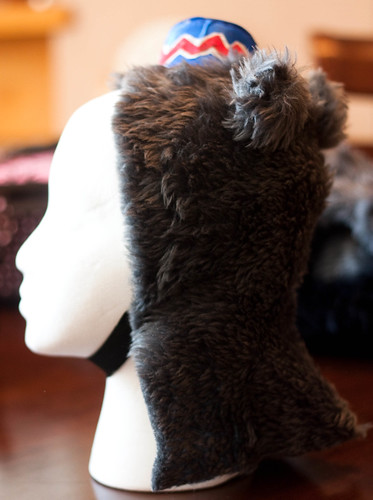 The monkey hood was based on a template for a coat hood and had extra fabric left at the bottom so could be tucked into the main body suit.  The hood was made as two pieces and stitched together and elastic stitched for a strap to hold it in place when my daughter was wearing it.  The ears were made of some scrap fabric rolled in to balls and pinched with stitches to make it look ear like these were then stitched on to the hood, I offset them to the rear slightly as to allow for both ears to be visible and not hidden by the hat.  The hat was stitched to the front right of the hood but slightly back as to allow the fur to come over the bottom of the hat and hide the stitching holding it in place. 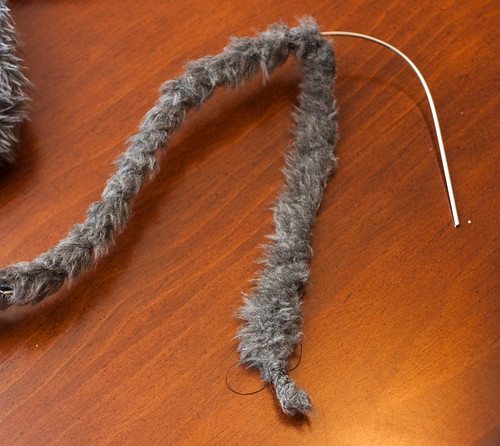 The tail as you can see is a wire that was wrapped with a strip of the fur fabric, it was secured to the end with thread.  The end had to be quite well covered with the fur as I didn’t want to risk her impaling other children so a blob or bluetack was put on the end also.  The tail proved to be quite heavy as the metal bar when attached to the body suit pulled down making her bottom look strange and walking was not easy.  To fix this the tail was mounted onto card on the inside on the body suit, in the next picture if you look closely you will see a flattened area to the bottom of the zip and that is where the card is.  The card was glued on to the body suit and the tail was attached by gaffa tape and string to secure it in place.  The tape held the tail but once she was moving around the tail worked it’s way loose a little and moved so the tail had to be attached by thread from the main bend in the tail to top of the body suit to help support the weight.  After adding the thread to hold up the tail worked fine but if I ever do a tail again I will be looking for something lighter as the metal bar was just too heavy. 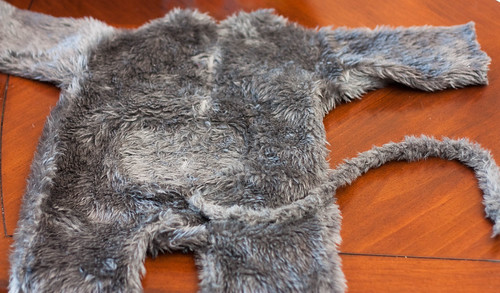 The monkey suit was based on a romper suit and that was used as a template.  I was unsure the best way to get the suit on and off so I opted for a zip as it would be hidden by the wings and waistcoat.  As explained earlier the flattened area for the tail mounting can be seen to the bottom of the zip but this was mostly caused by wear and is not overly noticeable when wearing the costume. 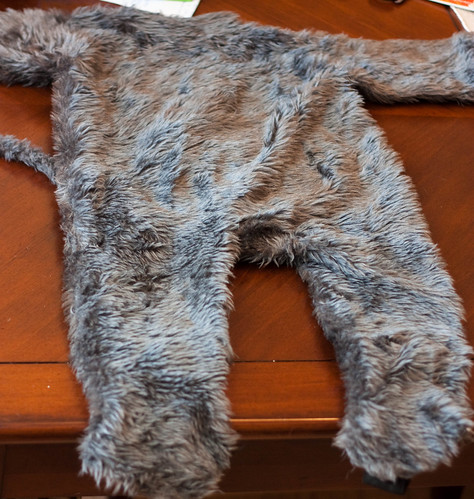 Here is the front of the suit.  Around the neck was a rolled up strip of the furry fabric to act as a collar, the same was also done to the wrists as I wanted to leave her hands free so her could still play and didn’t have to have it attached to her hands in any way.  Fabric was left extra to the legs to allow the suit to have shoe covers. 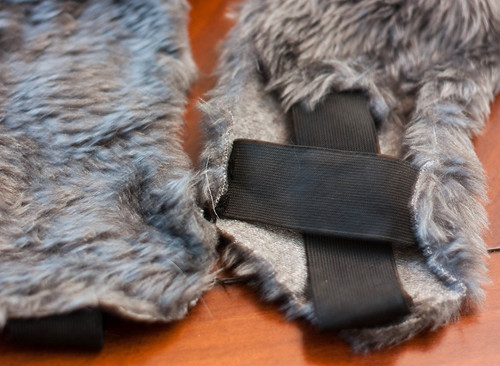 This is the feet.  At the front of the body suit I made a curved bottom flap at the bottom of the leg and at the rear it had a shorter flat bottomed flap.  The curved front then had elastic added attaching it to the rear flat bottomed flap and another piece of elastic was attached in the opposite direction going from one side of the front flap to the other. 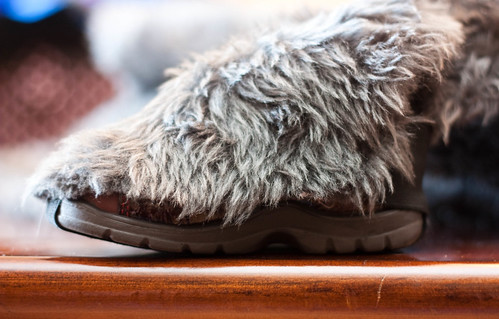 Attaching the elastic allowed me to be able to have a shoe on and be covered with the fur.  It worked quite well and since she was able to wear shoes it made this costume suitable for wearing outside and didn’t compromise her mobility. 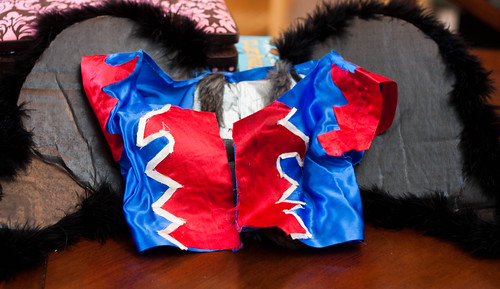 My husband’s contribution to the costume was that he was going to make the wings.  For the wings he got card, cut it out and spray painted it black.  I added a fluffy black feather trim to them and they were ready to be attached to the waistcoat.  The waistcoat was made from the same fabric as the hat.  I didn’t work from a pattern for this as I thought how hard can a waistcoat be… big mistake but I got there in the end.  The red and white was added to the front and red around the arms to give a bit of detail to the waistcoat.  Ideally I would of liked to have added the same white trim to the arms like the front but at this point I was running out of time so decided to leave them red. The waistcoat had to be slightly longer in length than the centre of the wings and large enough to fit over the fur suit so it came out looking a little strange in size but once on with the wings attached it worked fine as the fur bulked it up underneath. 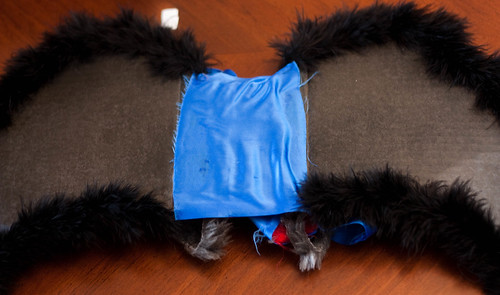 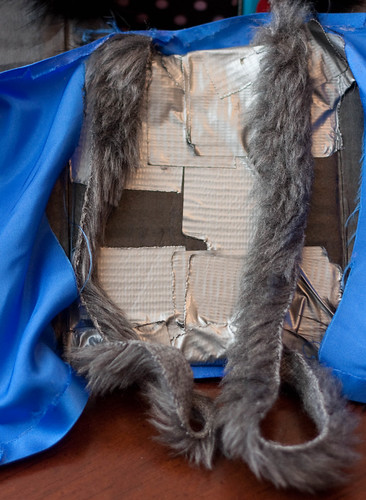 I decided to use two strips of the fur material to make the straps as the waistcoat sat open and I didn’t want strapping or elastic to be visible and using the fur would allow it to blend in.  Two strap were attached to the inside of the wings with gaffa tape and took the weight of the wings quite nicely. 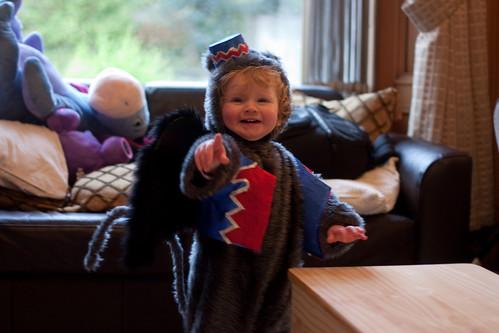 And there you have it one complete flying monkey!  Fly my pretty!