Since Halloween is almost upon us I decided to make Roslin a crown for with her costume.

I started off with a plain hair-band then used the same sequinned eleastic that I had used on the halter-neck of her mermaid top to wrap around the band.  The ends were secured with hotglue and some elastic wrapped round them.

Next I got shells I had got on a holiday and used a combination on hot glue and thick thread to first attach the two large clam shells at the rear, next I used some blutack to attach other shells in position so I could see what it looked like and so I could swap them around, when I was happy with the final layout I took a photo and then took the shells that were blutacked on off and hot glued them into place.

Next I got from a local haberdashery two meters of fake pearls, I got small beads as my plan was to cut them into strips and mount them onto the band so that when wearing pearls would be mixed into the hair.  These were also attached with hot glue to the band under the sequinned elastic I had applied earlier, some were also attached to spaces between the shells.

So here it is, sorry about lack of in progress shots but it really is a nice quick thing to make and it came together sooner than I thought but I hope you like it. 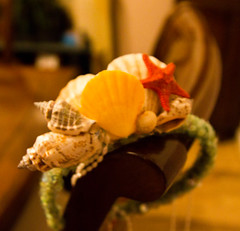 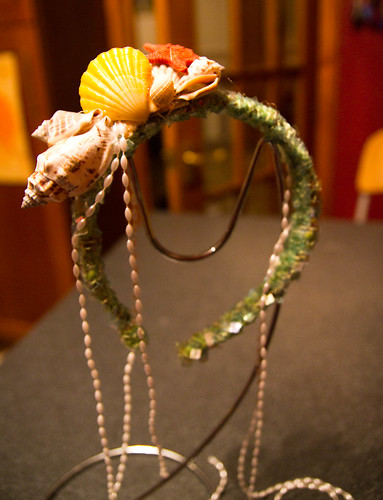 The rest of her costume can be found here