As having enjoyed the Bioshock games my next project is going to be from that.  This project was suggested by Ben for wearing to the Glasgow Zombie walk and I loved the idea so started work on a bunny mask.

After doing a bit of research into the masks I decided recreate the official mask which looks broken up rather than the pristine mask, well I never was one for making things easy for myself.  Anyway since these are only available state side I’m making my own.  This is what I am hoping to achieve. 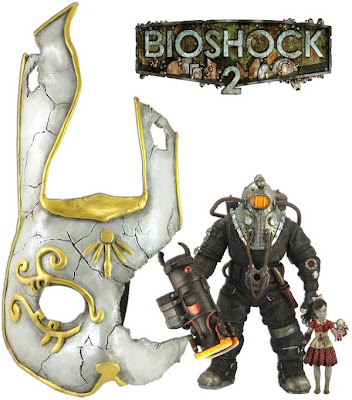 Firstly I took a plain white mask and cut it up into the shape I roughly wanted.  It was easier to use a full mask as to get the desired jawline.  This has only been roughly cut to shape at the moment as the detail will be added by paper mache later. 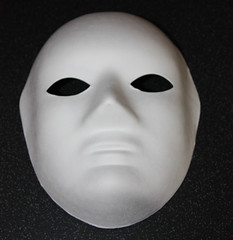 The ears I had a couple of options with, but I decided that I wanted to have them quite strong so I uses some metal rods (thanks dad!) and bent them to the desired shape.  there were then held in place with a little hot glue so I don’t get impaled in the head when wearing it and gaffa tape. 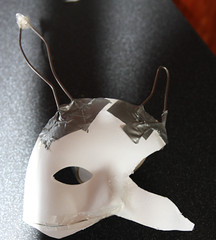 Next is the fun part, PAPER MACHE!  Have not don’t this since I was a kid so it was a lot of fun building up the layers.  First layer complete, this has filled the ears and a few layers has went over the main mask.  And the old banana holder is proving handy in my prop building as am able to hang it up to maintain the shape of the mask.  The following layer will be building up the edges and nose then a white layer of paper will be applied. 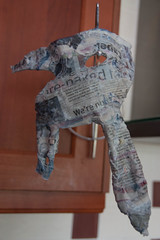 While the mask is drying I started working with air drying clay to make the details on the head and around the eye, this will be added before the final white layer of paper mache to hold it in place and maintain the same texture to the mask.  Sadly though before I started this I noticed that the hook for drying had pulled on the eye, so I attempted to remove it to repair the damage and an ear fell off.  So after this was reapired (more hot glue and gaffa tape) I decided to place the mask ontop of an uncut mask with the jaw I had cut off my Splicer mask used to prop up the ears until the paper mache had set.  This now will have to be left for at least 24 – 48hrs to totally dry.  Some trimming will also need to be done once dry to the upper lip as the clay curving up has left mask exposed but once dry that should be an easy fix. 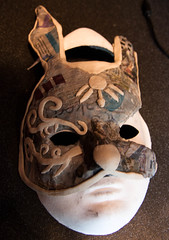 Once everything had finally dried out it was covered with plaster of paris, I learned a few things doing this, firstly… don’t use plaster outside on a breezy day it drys quick, and if applying airdrying clay for detail it is best to do this AFTER the plaster application as some detailing gets lost.  Once the mask was covered I took a fine sandpaper to the mask to take away some of the plaster and to leave patches to create a roughed up effect as unlike the one sold I wanted this to look a bit more realistic and look battered and worn rather than fake wear and tear. 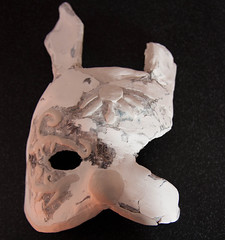 Next came the final stage of painting and weathering to finish the mask off.  An off white was used as the base colour of the mask as white is a bit too, well um white and the gold detailing was painted on using some games workshop paint along with a dark wash again using ink from games workshop to get the final desired effect. 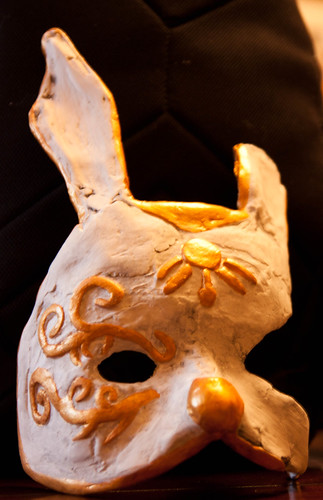 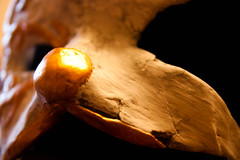 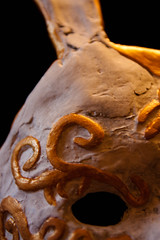